Dudeville – A Novel by J.D. Kleinke

Imagine Huck Finn “lighting out for the territories” 150 years later, this time as a late-30s
corporate dropout turned backcountry snowboarder and mountain climber.

Dudeville – A Novel by J.D. Kleinke

Of course it’s autobiographical! I can’t imagine how anyone could write fiction that rings true for readers without some elements of their own personal experience, sorrows or joys seeping in around the edges, if not filling its center.

Dudeville is my coming-of-middle-age adventure story about a late-30s corporate dropout turned backcountry snowboarder and mountaineer. The novel charts the spiritual exploration and self-discovery that comes between the trailhead and summit of any big mountain. Like with my last novel, Catching Babies, I also wrote Dudeville because I couldn’t believe someone already hadn’t written it. It felt like a book missing from the world.

My biggest ambition with Dudeville was to connect the adventure sports movement that emerged in the 1990s — and is now flourishing all over the country — with all the old American myths about westward migration, self-invention, and spiritual liberation. I also wanted to memorialize a bittersweet time and place in our cultural history, when more and more people were discovering wilderness, adventure sports, and the backcountry, but right before technology invaded every last square inch of it – a time when you really were all on your own out there. No cell coverage, no helmet-cams, no social media to show it all off.

Perhaps because living and playing in the mountains was all still new to me, and I was watching the trails fill up with people, but the first time I heard some guy on his cell phone on the summit of a “Fourteener” in Colorado — a mountain higher than 14,000 feet in elevation — it felt like the second closing of the American frontier.

That unique moment in American cultural history, illustrated throughout Dudeville with a mix of big adventure, bawdy humor, and local color, is underscored by my unabashed homage to the literature of the American West. Throughout Dudeville, you will find echoes of –- and the occasional explicit reference to –- the work of Mark Twain, Edward Abbey, John Muir, Dee Brown, and Wallace Stegner, and the lesser known but more timeless works of Jack Kerouac. All of those authors were caught between a longing for the spiritual freedom and personal release that comes a few hundred feet into a big, wild, wide-open landscape – and a painful awareness of what happens in their immediate wake, at the hands of those who came behind to mine, pave, fence in, subdue and commercialize that landscape. I tried to capture that in the story too, Because it really is a story about one guy’s late-onset adolescence as metaphor for the end of yet another American innocence.

While following Dudeville’s characters on their various adventures in the Rocky Mountains, Sierra Nevada, and Arizona desert, you will also get a primer on the bloody history of the American West, as I attempt to connect its legacy of violence forward to some of its more disturbing modern events. From the perspective of adventure tourists, drop-outs, or down-shifters looking to chuck it all for life in one of those mythic “perfect ski towns,” the American West seemed and maybe still seems vast, wild, and free. For them, the West is this great big empty canvas, where you can be left alone to do your own thing. But that was, and is, the biggest myth of all.

The West was never empty. And out there, you can be far more vulnerable than in a big city full of crime and people. Just ask the majority of Native Americans living in grinding poverty on the reservations how free it really is. Or ask Matthew Shepard. That was another big ambition of Dudeville. I wanted to show just how historically and emotionally complex these places actually are – these places that look so pretty in the postcards, in the adventure travel magazines, in all the breathtaking ads for ski resort real estate.

As for those autobiographical elements…like the narrator of Dudeville, I was a very serious business guy. I have worked in the US health care system since 1989, and I’m the author of three books about medicine in America, including Catching Babies, a novel about the culture of maternity care and childbirth. My work has appeared in The New York Times, The Wall Street Journal, and dozens of medical and business publications. I’ve also been involved in the formation, management, and governance of several health care companies and non-profit organizations, and I still am today — though I spend most of my time dreaming about or working on the sequel to Dudeville…

Dudeville also charts the spiritual exploration and self-discovery that comes between the trailhead and summit of any big mountain.

A celebration of the great joys – and occasional terror – of big physical challenges in soaring landscapes, Dudeville is a sensuous, lyrical, exuberant exploration of the American West.

“From this summit, the horizon seesaws open into an electric blue dream of Colorado sky. The adolescent swagger and brawn of the Rockies is nothing like the stooped and rounded hills back east. Spiked with mammoth formations of rock and ice, this vast, continental cacophony is the very roof of the world, pushed skyward by geologic time while collapsing under its own weight. I drop in, and surf off the wind-scoured edge, working the margin between transcendent bliss and utter catastrophe, a controlled fury exploding from my core into arcing snowboard turns as I crisscross the fall-line and dissolve into gravity…” 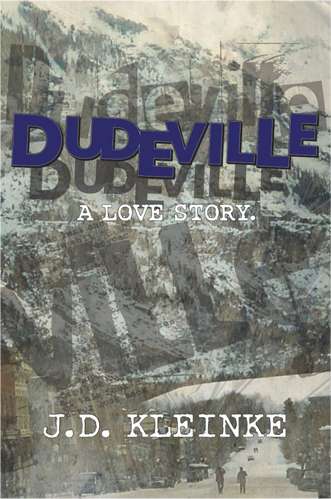