Three days short of twenty-five years ago, I was working late as usual, so I didn’t hear the news until I got into my truck and turned on the radio to WHFS, Maryland’s indie rock station.

There was an odd silence, dead air, then the sound of muffled sobs. Was the DJ crying?

I turned it up and he mumbled something about Eddie Vedder going on stage anyway, right after he’d heard the news, and all he could do was wander around in a daze, singing an endless version of “I’m Alive.” Then the DJ played Nirvana’s “Heart-Shaped Box,” “Lithium,” “All Apologies.” Then more silence, and muffled sobs.

Kurt Cobain, he finally reported, had been found dead that afternoon of a self-inflicted gunshot wound to the head, alone in his home in Seattle, at the age of 27. Later, we found out that he had been dead for three days before anyone found him. 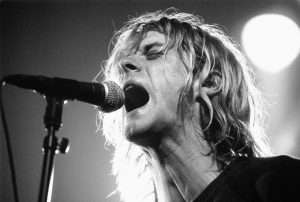 That night, I drove through the Maryland countryside for I don’t know how long, not wanting to go back to my own home alone, listening to one Nirvana song after another and crying openly because no one could see or hear me.

At the time, I didn’t know much about Kurt Cobain, only that he was everything I had ever loved about punk rock. He was one big screaming “fuck you” to all the stupidity and ugliness in the world, and he liked to use his guitar as a club and his body as a concert projectile. I also knew that, as a fledgling guitarist who’d tried to play along, his songs were also so much more than punk’s two or three hacksaw barre chords. Undergirding all that rage and volume and distortion were playful, child-like melodies, intricate and unlikely riffs, and chord changes as inventive, unlikely and compelling as the best of Lennon & McCartney and Joni Mitchell.

In the years since that awful night, I’ve read the books and seen the films about Kurt – most recently the grueling Montage of Heck, a brilliant visual scrapbook of childhood home movies, fragments of Nirvana shows, family interviews, creepy junkie outtakes, and diary scrawlings of intense personal pain brought to life through stunning anime and animation.

One of the recurring themes about Kurt’s legacy is his affecting resonance with the pain and alienation of adolescence. Yes, for many kids, high school is that ugly, dystopian nightmare of the darkly hilarious Nirvana video, “Smells Like Teen Spirit” – and wouldn’t we all have loved trashing the gym where the jocks and bullies made our lives a living hell for four years?

But beyond the adolescent angst, I am saddened to say that Kurt’s rage — as it is for many kids of all ages — wasn’t steeped in anger and aggression so much as it was in crippling fear, shame, and self-hatred. His music is filled with plenty of delicious contempt for the idiocies and cruelties of the world; but he saved the worst of it for himself, for the self-loathing that inevitably fills the emotional black hole of any child who grows up feeling neither safe nor loved. When self-hatred that primordial is not only not dealt with, but perversely rewarded for its expression in art and exacerbated by drug addiction, is it any wonder that suicide ultimately beckons from the bottom of that black hole?

This is what I really heard in music I thought I loved for nothing more than its “fuck-yous,” and sneaky chord changes, and exploding choruses.

I too was a hyper-active, hyper-sensitive, hyper-creative child. I too was roundly shamed and abused for it by an awful, violent man who never should have been a father (or stepfather). I too stood between his blows and a mother unable to defend herself or my sister or me. Punk rock and nihilism and homelessness are where I too ended up in my late teens and early 20s, in a mindless Cold War world that appeared — to a hyper-sensitive, hyper-creative, dispossessed kid — as impenetrably hostile and hateful and stupid.

I survived all that, if only because I was never so gifted nor quite so broken as this battered little genius of a man-child, and because — through all that — I somehow always felt the presence of divine benevolence, however threadbare it was in my own darkest days.

But long after I thought I’d grown out of my own pain, right about the time I’d gotten on my feet and become addicted to work and adrenaline instead of what Kurt found to numb himself — when I thought I’d finally freed myself from the last tentacles of my past and family of origin — I found this man, and his raw, playful, ragingly infectious music. It spoke directly to the black hole of shame and self-loathing still roiling away in my own soul, to the fury and sadness and fear that had been there all along.

All apologies, and rest in the peace you never knew in this life, you sweet little boy. You were born perfect; the pyrotechnics of your anguished musical genius gave great succor to so many of us while you were here; and you are perfect once again.