“All these problems were happening in my life, and the only time I felt really good was when I was surfing,” Shane Dorian says in the somber opening solo interviews that kick off Momentum Generation.

The HBO Films documentary, made by Jeff & Michael Zimbalist and released at the end of 2018, gained new life last month when it was nominated for two Sports Emmy Awards: Best Long Form Documentary and Best Music Direction. 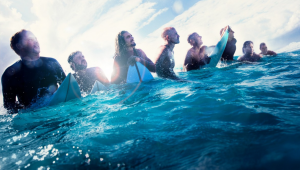 An adventure sports film does not win a nod for a mainstream Best Documentary Award because it out-muscled dozens of its peers with marginally more mind-blowing cinematography or gut-wrenching badassery. Rather, it transcends the entire genre by touching something within as well as without, by celebrating not just the physical genius of a demanding sport but by penetrating its soul.

“That’s when I had a sense of purpose,” Dorian continues. “This is who I am. I was that surfer kid, I wasn’t that bummed out kid at home.”

Or as Taylor Knox says, “my way out was surfing. Things are chaotic? Go out in the ocean. Which is funny because the ocean is chaotic. But I felt calm out there.”

From those opening confessionals, a film that looks from its packaging like it could be just another montage of stoke – this one about a bunch of gifted kids who drove each other into what became arguably the greatest generation of competitive surfers ever – turns immediately inward, goes mid-life, gets real. The vehicle here may be a surf film, but Momentum Generation is about the consequences of domestic violence, adolescent rage, toxic masculinity, loss, grief, and redemption.

No spoiler alert here, because most of the Momentum Generation surfers have grown up to be fixtures in the surfing world, as veteran competitors, actors, filmmakers, entrepreneurs, and TV commentators. They are still tanned and ripped, and still shimmer on camera. And while their collective coming-of-age backstory looks at a glance like the fantasy of every bored, lonely, landlocked kid who ever dreamed of cool friends, perfect waves, and the endless summer, this tough, intimate film catalogs these kids’ real backstories, and they are not pretty. Most were brutalized by alcoholic, addicted or controlling fathers, and/or neglected by overwhelmed mothers; it was their immense fortune that in fleeing their wrecked homes, they found their way as teenagers to the fabled North Shore of Oahu and found each other.

It is a great pleasure to see clips of what these pioneering shredders looked like out on the waves as prodigy groms — and fun to see the home movies of their frathouse pranks in the single-parent North Shore home that took them all in. But the bulk of the footage and photos of these champion athletes as scrawny, unkempt, overcompensating little kids is painful to watch: the menacing staredowns, the vicious fights on the beach, the anguished expressions when they thought no one was looking, all paired perfectly with the circumspect voiceovers of difficult memories, unresolved pain.

“Surfing was my savior,” Kelly Slater says in that opening sequence. “All my challenges at home and my parents splitting up – I channeled all that into my surfing.”

And channel it he did, becoming arguably the greatest professional surfer of all time, winning a record 11-time world championships that may stand forever.

Momentum Generation documents how the teenaged Slater and his fellow lost boy surfers rose to greatness in the 1990s by stealing the world championships from the once dominant Australians, amping up the sport as part of the larger explosion of “extreme sports,” and helping to turn surfing into a now $50 billion dollar a year consumer economic juggernaut.

But at what cost? Slater won those titles by beating, in most cases, not just friends, but his adoptive brothers, the only family he had left.

“Friendships, relationships, happiness. Is winning worth giving up those things?” asks Rob Machado, Slater’s closest competitor. “The surf industry pitted us against each other.”

It may have been a coincidence — the surfing money machine was going to gobble them up anyway — but everything changed when the group’s adoptive big brother, Todd Chesser, drowned while surfing in 1997 at the age of 28.

The film documents the shattering impact of this sudden, wrenching loss of their de facto guru, competitive role model, and moral compass — and of how they dealt with this horrific emotional blow by not dealing with it. These were street-hardened kids turned big wave hardened locals; they didn’t talk about their feelings; they didn’t cry.

It did not help that Chesser passed – in almost too perfectly a metaphoric way – just as the surf industry was going from edgy, fringe sport, to mass merchandizing vampire squid. “Extreme sports” were inspiring mainstream fashion statements; snowboarding, skateboarding and surfing went into a virtuous feedback loop of tricks, looks, and attitude; and a floodtide of sponsorship money that swamped surfing.

Momentum Generation ably documents how the money and media and competitive pressure, combined with all that unspoken grief about their shared loss, blew apart this testosterone-fueled tribe of wounded young men. They found themselves no longer the upstart punks trying to unseat the Australian and native Hawaiian champs, but under immense pressure to turn on each other in competitions. Some thrived and others fell apart. The film painstakingly documents the especially fierce rivalry between Slater and Machado for the top spot on the tour, with discomfiting detail intimacy. You feel like you just walked into a terrible old family argument that will never be resolved, and you do not know whose side to take.

It is important to note that the gifts of the guys in the Momentum Generation were not limited to surfing. The title of this film is a shout-out to Momentum, the ground-breaking, 35-minute VHS gem of an indie film made by one of their own, Taylor Steele. Momentum dispensed with the surf film’s usual long flowing lines on endless waves, and instead used jump cuts and rapid-fire, agitated montages of the whole crew shredding waves with an intensity rarely seen before then – a filmmaking style almost immediately and permanently incorporated into adventure sports filmmaking.

For his soundtrack, Steele also ditched the ukuleles and dreamy beach ballads, and unleashed punk rock – another element long since standard in board sports films. Melding hardcore punk’s blazing tempos, jackhammer guitars, and menacing vocals into ripping action footage changed everything — for surf films, action sports film in general, even for the course of punk rock. Notwithstanding the bleak urban origins of punk’s core aesthetic, the aggression, rebellion and fury that define its delivery served was and continues to serve as the perfect musical accompaniment to a culturally edgy, physically harrowing sport marketed to young, mostly male audiences.

The radical, seminal Momentum came out in 1992, and nearly every snowboard, skateboard, freeskiing, and mountain biking film to follow amped up their own footage with hardcore “surf punks” (on my Pandora anyway) music.

Looking back three decades later, it seems not just inevitable but perfectly obvious that someone would unleash the music of youthful rage into the action sports movies, starting with a DIY one about a bunch of lost boys trying to work out – or trying to avoid – all their demons back on shore. Nor is it an accident that punk works so well in films about board sports in particular. The predominant emotion running through punk is rage, an anger located in the core in the belly, from the solar plexus down into the hips – the part of the anatomy where you snap a turn on a surfboard and snowboard. This is where somatic healers east and west believe we store trauma and express aggression, the part of our body activated when we brace ourselves to take a punch, or give one back.

But the gifted, wounded men of Momentum Generation do grow up and do appear to be healing. After spinning apart, they seem to be coming to terms with themselves and each other, one of the great tasks of mid-life, if only for people with the time and energy to reflect on how they got from there to here. If there is any criticism of the film, it is the sneaking suspicion that, near the end, the reconciliations and reunion are a little too pat, a little Hollywood.

But this may be the result of its masterful construction, its near perfect story arc, light touches, and deep affection for its subjects. After competition, money, and unresolved grief finally blew them apart, sending them off on their separate journeys around the dark side of the moon, the lost boys of Momentum Generation appear to have grown up just fine.

This, in the end, is what makes Momentum Generation transcend the surf film or even adventure sports genre: its broad appeal, not just to surfers, but to families, to teenaged boys who may or may not have it so rough, and to lost boys of all ages as both cautionary tale and redemption story.